the vision and the void 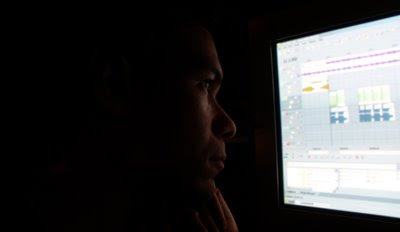 trying to bring a sound in your head into the world is a maddening task at times. i know i drive myself and others a bit nuts trying to get it. but when a goal seems so perfect and yet attainable, it makes sense to go after it.

our sometime live sound engineer and studio keyboardist scott gave me a bemused look when i told him i wanted a single instrument halfway between a guitar and a piano. even worse, during a live-in-studio jam, he made an incredible synth sound that i thought would be perfect for the same song. he had no idea which program it was or how he'd manually changed it at the time. since then i've spent hours tweaking two different synths trying to recreate it or at least come close. in fact, the overall mix of sounds and styles is so delicate that at this point, i'm not even sure the song will end up on the album.

in the first example, the sound is essentially created in my head. in the second, the sound is something i've heard a recording of and therefore know is possible.

strangely, the latter scenario isn't much easier than the first, even with sampling technology. you have to find the sound isolated, if you can even track it down in the first place. the final nagging piece in the puzzle of the impossibly labyrinthine song mentioned in an earlier post is, in my mind, a fairly standard drum machine kick or tom i've heard on a hundred hip-hop or techno records. of course we'll give it our own touch, but we can't even find the original, and we've gone through dozens of sample libraries. any number of other kicks could be used, but none of them are the right one. so the search goes on.

other times, when the elusive "sound" is more of an overall effect, i end up sounding even more unhinged. for "secondhand daylight" i told the others it should sound as though the whole song was being heard through a layer of gauze while on valium. unfortunately, the literal interpretation of that was for me to muffle or delay every instrument. it may have been a faithful to the sonic concept, but it sounded awful. maybe we should release that version as a deterrent against valium and gauze abuse.

that song is now complete, after achieving the same effect through a different version of the same idea. in the end, the joy of finally finding the right sound erases all the agony of searching and of working on incomplete and incorrect versions. when you get something right, it just works.
Posted by d. at 22:11 1 comment: