the story so far 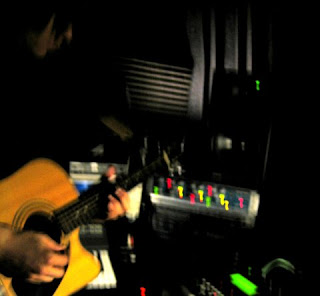 contrary to what may seem to be, i don't strive to dwell in the negative. expression of negative feelings is healthier than suppressing them. this is one of the things dream into dust is about. the name itself might seem to be resigned, but its existence begs the question: what do you do when your dreams turn into dust? answer: you carry on with reality.

the current reality has been pretty bleak, but at times we can focus on the bright spots. the fact is, we have accomplished a lot. the oldest unreleased song, "flowers of destruction" is up on myspace. a lot of other songs are close to being finished. "end of memory" which was previewed in live shows, has weathered its changes for the better and only lacks one tiny guitar bit from bryin. another song we've played live, "secondhand daylight", is essentially done, after a bout with temporary insanity that had me rewriting half the music; a few tweaks and that will probably be online soon. a really heavy song, one of the best we've ever done, just needs two overdubs, while a pair of melancholy but danceable(!) tunes are all worked out and just need to be laid down. even the labyrinthine first song we started sounds better than it ever has, with only a few brow-furrowing beats and missing accents to nail.

better yet, a new attitude of working has led to renewed creativity. bryin and i no longer wait for anyone else to show up. the quandry discussed in a previous post is being circumvented. the work we've done with other musicians has been very rewarding and enriched the music, but at a cost. this is not to blame the other contributors, but acknowledge that sometimes people work in different ways and have their own creative paths. this doesn't mean ruling out working with others in the future, if the right people present themselves.

this means we're keeping most of what we've done, getting it out electronically when we can, and pushing forward with new songs and ideas. and damn it feels good.
Posted by d. at 14:20 No comments: