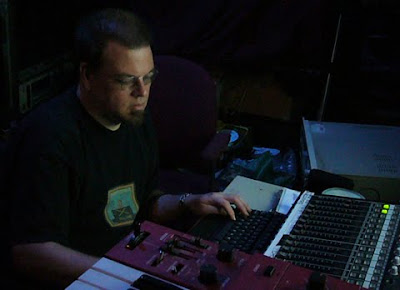 working with bryin dall isn't like working with any other musician. he's not a muso full of technique and attitude. his approach is either to play totally from the gut, or from a place that leaves almost everything to chance.

in the latter sense, he reminds me of brian eno, who would also set up a series of seemingly random parameters and then do experimental treatments of various sound sources. the end results, however, are totally different. while eno still ultimately tied his work to melodic and harmonic elements, bryin tends to create atonally, based on texture and rhythm. when he does play notes, he often knows instictively what note to play, even if it makes no sense in the key of the song. a few times i've pitch-shifted him to make it "right", and found that right is wrong and wrong was right after all.

sometimes i go to him with a specific sonic request. a recent one for the new album was something like "make this beat sound like whirling knives". he usually comes up with solutions and methods completely different than mine would have been.

often it's better to let him just go off on his own, whether on noise guitar, original loops, or creative sound manipulation. the results can end up being the beginning of a new song, or the perfect missing piece to an unfinished one. there's a new song now that started from him pulling up a sound, putting his hands on the jupiter 8, and switching on the hold button. some might say there's not enough thought put into such actions, but he's the one who made those choices and set events in motion.

just like with photography, making technical choices and capturing moments isn't enough. what you choose to keep, discard, and emphasize is the final step. if he were to continue on his own recordings (as he does with 4th sign of the apocalypse), he'd probably use what i throw away. several times that's actually happened if he's been in the room as i edit his performances. he'll ask for the clicks, bumps, and stray artifacts to be saved for him. his is the realm of the discarded, the forgotten, the ignored.

what i look for are the peak moments, when he reaches the heights of whatever other realm he's channeling. he gets to those places easier, and edits himself more appropriately onstage. in the studio however, every option, every random impulse, is tried and acted upon. meanwhile, i record it all with a barely-suppressed grin on my face.
Posted by d. at 20:06 2 comments: