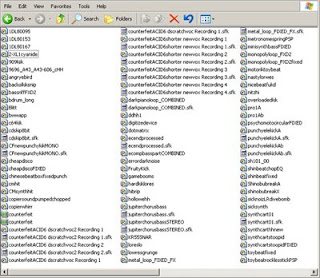 our first new song began, as several of them do, with a concept.
i asked my bandmate/collaborator bryin dall, and ryan smith of stars like fleas, for sounds relating to the concept. i recorded my own and scoured the web for more. i've lost count of how many sounds were collected for this one song.
bryin and i worked on it exclusively once or twice a week for about three months. i don't know how he kept from shooting me in the head during that time, except he has as much of a love of sound manipulation as i do. it was like putting together a jigsaw puzzle, except we had our own hacksaws and ink to be able to change any piece to fit.
jason of the unquiet void came to the studio and heard an early version. he was pretty shocked, as it didn't sound like anything we'd done before. after i added vocals, a potential manager heard it and got it stuck in his head for the rest of the night. it seemed like things were moving along.
then at some point, the other three people in the band told me to cut out what i'd thought was the best part of the song. i went back and worked on that section for hours, until i realized they were right. since then, other parts have been painfully excised.
nothing makes life seem futile more than work that feels wasted. not just the time and effort spent on it, but the realization that the good aspects of what was done will probably never be used or appreciated. we still have the pieces. some are saved as sketches for potential new songs. but they feel like unwanted children, or dismembered ghosts of possibility.
what remains is better than it ever was, but at the moment it reminds me of a patient who's had multiple surgeries in a short timespan. still healing, but in need of more work.
Posted by d. at 08:35