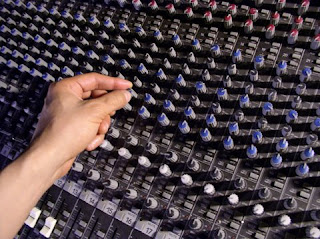 i'll qualify that. i hate non-creative engineering. how loud does something have to be. what frequencies to compress or enhance in relation to a similar-sounding instrument to make sure you hear everything. trying to cut down on hiss without destroying a sound's character. how to give something ambience without turning it into total mush. eliminating that horrific screech buried in a sample that is ripping your ears out. fighting tooth and nail with an incredible loop that has a shitty sound, or else giving up on it, thus changing the character of what you were working on.

but i love tweaking.

when you have an idea and can add an effect (or five) and transform one sound into another. when you can just reach out and change a bunch of settings til what was in your head is now coming out of the speakers. when you find that doing something wrong creates something that feels right.

unfortunately, the two need to go hand-in-hand. tweaking without applying engineering knowledge can back you into a corner. we're currently having one of those moments when we realize we have to go back to an original version of a sound, or even redo it entirely because it's not going to get any better, much less be what it should be.

ironically, admitting defeat on one level is freeing on another level. alternate methods present themselves, and the goal once again fills my mind's eye instead of the wretched sonic abortion that's been filling our ears over and over. a new start means a new chance.
Posted by d. at 23:40